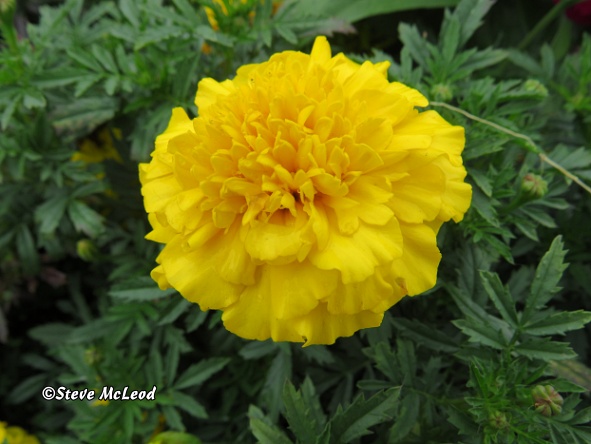 Good morning everyone! It’s a bit wet again this morning, we had a little rain overnight, not very much though. And it’s rather cool this morning as well. I think we have moved into fall temps now, it’s been like this since the beginning of the month, except one day it was hot. Usually temps don’t drop until the middle of August, so it was kind of early this year, actually very early. I hope that doesn’t mean we’re in for an early winter. But we could still get some hot days. It would be terrible if we didn’t. This cool weather has really slowed down the insect activity these days.

But on the plus side, it will give me some extra time to sort out my pictures, which is something I really need to do. That’s why there was no “wildflower of the day” this morning. There will be more pictures coming, hopefully starting again tomorrow. The gulls were a little late this morning and only 3 arrived, Sir George, Sir Charles and Ricky. The crows were here too of course. My little chickadee family was late too, but they finally showed up and are busy out there right now. The chipmunks, all 9 of them, have been here since about 6:15. I put out some birdseed for the chipmunks this morning. They were sure happy with that and didn’t even look at the peanuts until that birdseed was gone. I guess they like to have some variety.

However, Coffee and Choco concentrated their efforts on the peanuts while the others were busy with the birdseed. So it worked out well. Maybe I should buy them some birdseed next time I go shopping. It’s getting hard to find peanuts now. Cottagers are around in summer and they like to feed the squirrels and chipmunks too. Oh well, if they like birdseed, then that helps if I can’t get the peanuts. The sky is so brilliantly blue, the sun is shining brightly, it looks like it should be so much warmer than it is. I need to repot a couple of my African violets today while it is so nice.

I was out trying to get some pics of bees and wasps yesterday, especially this one huge wasp, there was actually 3 of them yesterday. Anyway, this tiny green bug with little black spots landed on my finger, so I decided to get some pics of this cute little bug. It bit me! No less than 11 times! It felt like a burning needle each time and it left 11 little lumps on my finger. I did get some good pics of it though. Amazing the things I will do, or put up with, in order to get a picture. There are still 6 spots visible on my finger this morning. That thing was so tiny, I never would have thought it would bite like that. Now comes the task of trying to identify it. Something I’m finding is not easy, there’s just way too many species of insects. But I sure hope I can identify this one anyway. Have a wonderful day everyone and God bless!