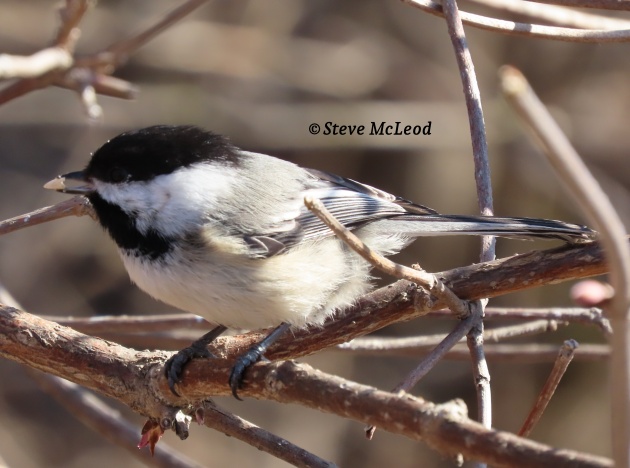 Good morning everyone! It was a beautiful, clear morning earlier and the sun began to shine so beautifully waking many of our birds. But birds were singing much earlier than the sun this morning. Robins, song sparrows, white-throated sparrows, white-crowned sparrows, Harris’ sparrows, ruby-crowned kinglets, plus loons were calling in the distance as were the geese. Theodora, the wild turkey, was here around 5am looking for some food.

And soon the evening grosbeaks, pine siskins, chipping sparrows, grackles, red-winged blackbirds and cowbirds were here at the feeders. Plus one male rose-breasted grosbeak. There were two of them here yesterday and twice I almost got a picture of them but something scared all the birds one time, the other time a grackle came and scared them away just as I was going to take a picture. Amazing timing. I had managed to get out the door without scaring them and then that grackle showed up. Sigh.

One has a nice bright red triangle on his chest, the other is more pink. That one is a young first year male. Getting a picture of either one is fine with me. The one with the bright red would be a bonus. I did get some very nice photos of a Lincoln’s sparrow yesterday, and they are hard to get. Lincoln’s sparrows like to stay hidden from view and this one was no exception to that rule. But with some patience I managed to get some good pics during his brief forays into open areas.

They are a small sparrow, much like the chipping sparrow in size. The Harris’ sparrow is large, about the same size as our thrushes (not including robins). Crunchy, the new addition to our chipmunk family, is getting braver now although he still will not come onto my lap. But I did get some pics of him yesterday which was nice. Skamper and Coffee have stopped coming around, hopefully that does not mean something happened to them.

They may be spending time digging out new homes, or at least new storage rooms to use. Something scared all the birds again just now, even the grackles and other blackbirds flew this time so perhaps a hawk came along. It turned out to be such a nice sunny afternoon yesterday, I should have gone to the river. But I decided to wait until today which was supposed to be sunny as well. For some reason that sunshine has disappeared again and clouds have moved in to replace it. Sigh.

It is bad when you cannot even trust the “next day” forecast. But perhaps the sun will return later. I see the birds are slowly beginning to return, they must have had quite a scare, they were gone about 10 minutes. Well, it is still bright, even though cloudy, so maybe I should go out and try for some photos. Thank you for reading, have a wonderful day and God bless!

Steve and Muffin. (Praying for the people of Ukraine)

6 Comments on “Wandering Through Wednesday. #19”