The Investigators, Inc. The Icelandic Mystery. Chapter 8. The Tomb. 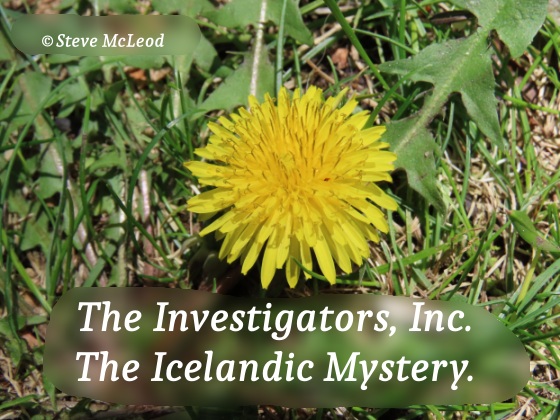 Just then we heard an explosion causing the dungeon to vibrate and part of it collapsed, not far from where we were standing. “Are you okay?”, asked Sigurbjorn. “Yes, I am fine, how about you?”, I asked in return. “Okay as well,” she said, “that was a big explosion, and very foolish, we need to move further back in this room.” She led the way, I had to walk backwards since we were bound together back to back. “That will make it hard, perhaps impossible for your friends to reach us that way,” she said.

“Well, they could use explosives too,” I remarked. “Oh, I hope not, it would be dangerous for us,” said Sigurbjorn, “this whole room could collapse on us if they do.” “Hmm, not good, and they will not know that,” I said, “I need your help to activate my tracker so they know where to look for us.” “But how?”, she asked, “they checked us thoroughly for anything we might have.”

“I know, but this is different,” I said, “it is implanted so it cannot be seen. Lift your leg back. Just a little higher and try to keep it stiff. There, that should do it, providing it is working. The cats alarms were not working and our phones.” “Yes, I noticed my phone was not working, which is very odd,” she said, “that has never happened before.” “That is good to know,” I said, “that means I know who is behind this, although that does not help right now.”

“We need to get out of here quickly, while we can,” said Sigurbjorn, “but it will take time and it will not be easy.” “That is okay,” I said, “if there is a way out, then we need to try it.” “There is another way, but the beginning will be difficult because we are bound together this way.” We went over to a large rock which we pushed aside and there was a small opening. “Of course we will not have any light to help us,” she added, “are you still willing?”

“This looks impossible to crawl through,” I said, “but I am willing to give it a try.” We got down on our sides and squeezed our way through. It opened quickly to a slightly bigger tunnel but we still had to crawl slowly along on our sides. It seemed to be getting colder all the time. I hope it will not take too long to get out of here, but I did not want to say anything to Sigurbjorn.

Meanwhile… Gunshots rang out as Kat and the others got closer to the cave. The man leading them was shot and killed. The girls and Rock returned fire and after about 15 minutes one man yelled that he was giving up so asked them not to shoot. The other 3 men had been killed already. “Take us to this dungeon,” said Kat. “I, I cannot,” he said, “but I will show what is left of it.”

He then brought them to the cave entrance that had been blocked by the explosion. “We will have to use explosives to move all of this rock,” said Jennifer. “Oh no, that would be bad,” said the man, “it would likely cause that whole dungeon room to collapse and bury your friends. That will be their tomb unless you can dig them out, that is what Mikkael wanted.” “Why did he want to kill them?”, asked Kat.

“Sigurbjorn knows too much about “The Company” and the head of The Company wanted to kill your husband, seems he knew him from somewhere and he wanted him dead,” said the man. “What is that man’s name?”, asked Jennifer. “I have no idea,” said the man, “not many people know him, and that is the honest truth.” “There is no way to dig this out by hand,” said Rock, “some of those rocks are just too big to move.”

“We better check with Baldwin to see what to do,” said Kat rather sadly. “We will get Steve out of there Kat,” said Galyna, “it just might take a little time.” “Yes, you are right,” replied Kat, “we will get them both out of there. Sigurbjorn is part of our family now.” “I totally agree,” said Galyna, as did all the rest of them. Then they went back to the lodge and told Baldwin what things were like.

“So Mikkael,” said Baldwin, “are you ready to talk again now? Who is the head of this “Company”?” “Ha! Find out yourself!”, he said and laughed loudly. That was too much for Muffin. She sat there and growled, MC joined in, then Storm joined, then they all attacked Mikkael! He screamed as they pounced on him scratching and biting! “Cats, come back now,” said Kat.

Reluctantly they jumped off and came back to her. “I think he needs help Fjola,” said Kat. So she got some towels and disinfectant to clean him up a bit. “We will find out on our own,” said Baldwin, “but…” Then the window broke and Mikkael slumped over in his chair, dead. A car sped away down the road.

← Coffee On Wednesday. #4
Coffee And Thoughts For Thursday. #4 →

10 Comments on “The Investigators, Inc. The Icelandic Mystery. Chapter 8. The Tomb.”