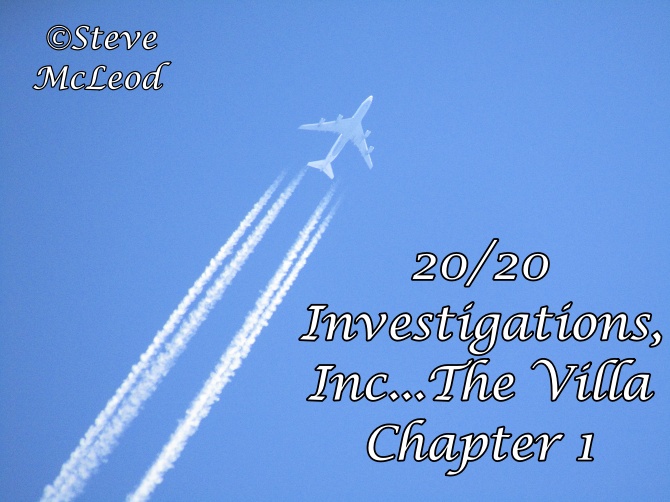 Well, here we are, Muffin and I, on the plane headed to our next case.  Where is that you ask?  We’re going to a palace on a lake in Italy.  Apparently there was a princess that killed herself there very many years ago by jumping off a high wall.  Or did she?  Anyway, before she apparently did this, she took and hid the family jewels somewhere on the property.  The family has been looking for them ever since, but have never found any trace of those missing jewels.  That’s where Muffin and I come in, try to find those jewels and find out what really happened to the princess.

Muffin is on the seat beside me, looking calmly out the window.  Some poor airline official at the airport said Muffin couldn’t have her own seat.  He never should have said, “no dumb animal can have their own seat on our plane!”  Muffin kind of lost it at that point.  But I’m sure that poor guy will be out of the hospital soon.  The airline decided to make an exception for Muffin.  As long as no one complained she could sit there without being in her carrier.  That made Muffin and I feel a lot better.

Just think Muffin, we’ll get to live in that old palace and look around for lost treasure.  And that place is like a castle, it’s huge, and was used as a fortress at one time.  Muffin was all excited when I said that, her eyes got big and her tail fluffed out.  That place has been around for hundreds of years, just think what we might find in there.  It’s going to be great fun!  Meow, meow?  Danger?  Of course there is always the chance of some danger in each case we take.  But we’re ready for that, right?  Meow.  What do you mean, “speak for yourself”?  Just think about exploring all those hidden passageways that must be in that place.  Meow.  What do you mean, “more ways to die”?

It’s only going to be the two of us there searching around.  Meow?  Ghosts?  You worry too much Muffin, just remember, there are no ghosts.  Meow?  Lydia?  She wasn’t a ghost, she was just pretending.  However, getting down to business, see that guy on the other side of the plane?  The one with the beard.  Muffin climbs onto my shoulder for a better look.  He’s been following us since we got to the airport.  Meow, meow.  No, we’re not going to get killed on the plane.  Stop worrying so much.  But we do need to keep an eye on him though.  I’m sure he’s probably connected to this case somehow.

I asked the airline attendant about him.  Meow?  Yes, the one that looks like the ghost.  Stop that, you know Lydia isn’t a ghost.  Meow.  Oh, you’re just used to calling her that.  Now keep your mind on the case.  Anyway, she said that guy has been asking a lot of questions about us. But she told him it’s against airline rules to give out personal info about other passengers.  He even offered her money for info, but she refused.  Meow?  Yes, she told me his name is Allen and that he’s working for some big oil company.  She didn’t like all the questions he was asking about us.  Meow.  She would make a good PI?  I think you might be right about that.  Anyway, she has helped us out already.  I wonder what he’s saying to that guy sitting beside him?