Posted on October 3, 2020 by stevescountry 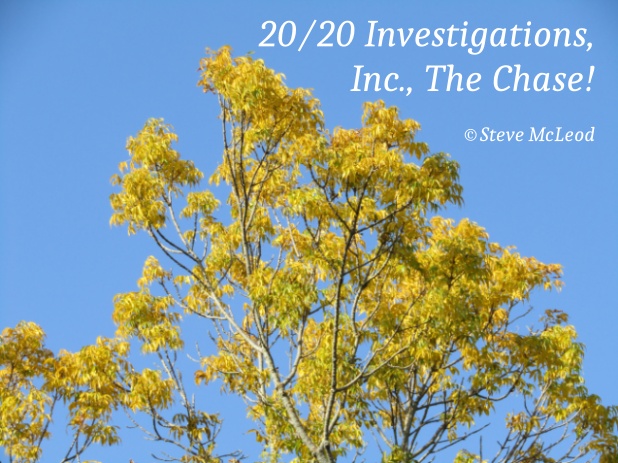 The door opened so slowly, it was quite dark in that room, just a glimmer of moonlight shining in through the window. I saw the gun. Thwock! The man fell to the floor, Mr. Cat had a perfect hit. Meanwhile Karin had opened the window and hooked up our rope ladder and Muffin jumped on and spread it down to the ground. She always enjoys riding it down as it unrolls, she has gotten very good at it. Karin followed her quickly, then I tossed my backpack down, which Karin tried to catch and knocked her flat on her back. Mr. Cat had used a rubber ball which I picked up and then he and I went down the ladder together. A quick flip and the rope ladder was unhooked and in my hands, then off we ran across the street and around behind another house.

“They must have gone across the street”, one of them yelled! We kept on going, crossing another street and around another house. Look at this, one of these old style entrances to the cellar from outside. It was unlocked so in we went. Amazingly as I closed that door in locked on the outside which was perfect. Now they won’t think we came in here. It wasn’t a very big cellar and was full of junk, and it was totally dark. I got my flashlight out and looked around better. There was an odd little cupboard on one wall. I tried to move it and it was on hinges. It opened to another small room which we crawled into. I closed the cupboard and it clicked shut, just in time as 2 men came down into the cellar. No one down here, I heard one of them say, and back up the stairs they went.

That was close, too close. We waited a little while, then I decided to go upstairs to check things out. Hmm, maybe I won’t be doing that just now. What’s wrong?, asked Karin. It seems this little “door” locked when I shut it and I don’t know how to open it. Meow, meow.=We help look for way out. Even the cats couldn’t find any way to open it. Karin muffled a scream. Meow, meow.=Guess she find “skinny” over in corner. I shine my flashlight over into that corner where Muffin pointed and see a skeleton. Meow.=Look like “skinny” not find way out. Skinny was a name Muffin used to describe the first skeleton we found on our case in England. Well, this is interesting, I said, it could be there is no way to open that door from the inside.

Meow, meow?=That not make sense, why make little hiding room if no way out? You have a good point Muffin, there must be another way out or there must be a way to open this door. We have to keep looking. After half an hour I was about ready to give up and I sat on the floor leaning against the wall by the door. I heard a click. Could it be? I pushed on the door and it swung open. I could hear no noise out there so out we all came and went quietly upstairs and right outside. I figured it would be better now to stay outdoors where we could keep on the run.

I looked and it seemed that everyone was congregating down on the far end of town. Let’s go over to the hotel, I said, they have searched that already. We moved quietly through the cool, still night. It was eerily silent. The moon was not quite half, but it gave us just enough light so we could move around more easily and yet still be able to stay in the shadows. It will be getting daylight soon, but what can we do? We finally made our way to the hotel. Their motorcycles were all parked out front with one man guarding them and he was sitting on the front steps of the hotel. We turned to go around back and suddenly a flashlight turned on shining right in our faces. Then another one behind us. Caught!