Posted on October 4, 2020 by stevescountry 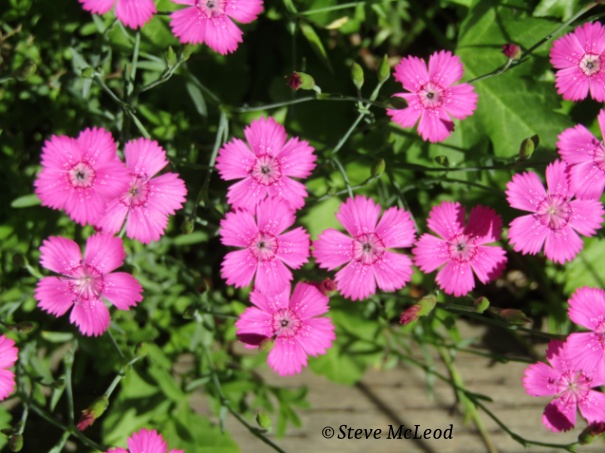 Good morning on this bright and sunny Sunday! It is a nice crisp morning with a temp of 36F (2C). It was so silent and still when I went out to hang the bird feeders this morning. But before I got back inside some little white-throated sparrows and juncos were starting to chirp. Then I took some seeds out to spread around for those little birds and more birds began chirping and the blue jays showed up as well. But oddly, only 2 blue jays showed up this morning. There is 10 of them. Even an hour later there was only 3. Very odd indeed. Coffee was here nice and early this morning. Perhaps the lack of blue jays helped him out a bit, he’s the only chipmunk that is afraid of the blue jays. A couple of those blue jays can be quite protective of “their” pile of peanuts, so they try chasing the chipmunks, who usually just ignore them. Sometimes the blue jays will even snap at the chipmunk tails. That’s a mistake though. That’s when the chipmunks jump at the blue jays. And that’s when the blue jays decide to retreat.

It’s interesting to watch that, especially since those blue jays are much larger than the chipmunks, but the chipmunks can make them run, I mean fly. Jasper hasn’t been here yet this morning. I wonder if he has chipmunk nightmares? Yesterday he was about to go in one of the boxes and 3 juncos came out so he tried to chase them. Guess he wasn’t sure which one to chase so he was going in circles again until he went head first into the side of the box. That made him stop. I put out some peanuts right then and Coffee was there and started filling up. Jasper didn’t see Coffee on the step and he jumped up to get a peanut. Both Jasper and Coffee took off in different directions. Jasper hid behind a bench while Coffee headed home. Jasper stuck his head out and saw it was all clear and he came back up on the step very slowly, grabbed a peanut and off he went in a hurry. He really is a nervous type squirrel. Maybe he will become more relaxed during the winter.

The featured image above is the “maiden pink”, a very beautiful little flower and very easy to grow. “Pink” does not refer to it’s color, it is a variety of flower and comes in different colors such as white, pink, red and purple. The pic above is the “birdfoot trefoil”, a fairly common and very bright wildflower that is not native to our area but has become common here over the years. Sorry if I might repeat some of my flower pics, but when my laptop quit working on me I did lose some things including which flowers I had used and not used. Sigh. I hope you have a wonderful Sunday and God bless!